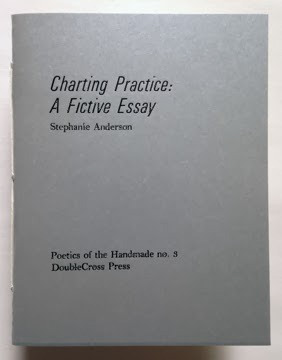 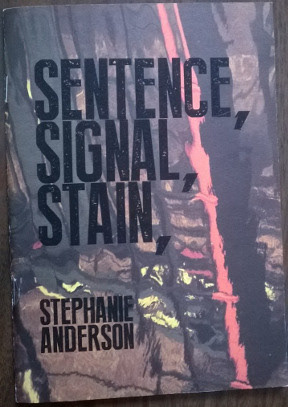 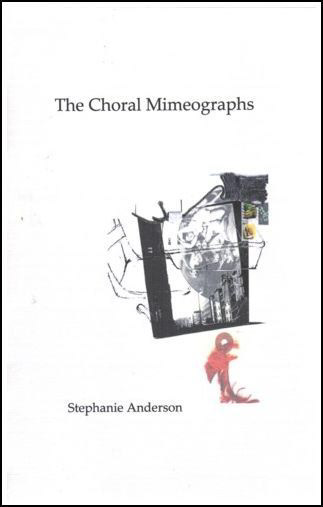 Charting Practice: A Fictive Essay (Double Cross Press, 2014) is the third essay in the Poetics of the Handmade Series, which asks writer-bookmakers to discuss the whys, hows, and wherefores of micropress publishing.
Sentence, Signal, Stain (Greying Ghost, 2014) is out of print. It consists of three poems, which first appeared in An Oulipolooza, Bling that Sings (one, two, three, four, five), and nonsite.org, and can be found in the full-length collection If You Love Error So Love Zero.
The Choral Mimeographs (Dancing Girl Press, 2009) is part homophonic translation. A version appeared in Lana Turner. Cover art by Meredith Ries.

The Nightyard (Noemi Press, 2011) won the 2009 Noemi Press Chapbook Prize.
“I am whittled / am gorged on peephole,” writes Stephanie Anderson in her multitudinous chapbook, The Nightyard. Here the Whitmanic impulse to be all things (or all persons) is modulated into a 21st Century conditional persona: “I would be sweetmeat / lead / mercury / peachblow.”  Yet Anderson is a distinctively American poet nonetheless, singing against the incursions of modernity in a regionalist poetics unblemished by sentimentality:  “Chainsaw, sing elsewhere: / I know this south-facing hillside.” Throughout The Nightyard, place and persona are relentlessly propelled through the wind-tunnel of form, bringing us to the breaking point of feeling and structure, for this writer can truly say, “If there was grid, / I wept it out.” —Srikanth Reddy
Like a steampunk great-grandniece of Lorine Niedecker, Stephanie Anderson has cobbled together a quirky, hardscrabble, and defiantly pre-digital idiolect in The Nightyard. Scrupulously crafted and a little austere in temperament, Anderson’s poems read, in part, like studies of the Protestant work ethic run amok, trusting in hard facts and practical tips to tame a mind “too bound to reverie.” Anderson offsets the smothered music of  “a barrel organ being—quelched” with the racket that emerges when “all the tiny pianos begin to tilt off the shelves,” correcting the rage for order with a dose of human chaos. The poems in The Nightyard are wise, tireless, uncommonly passionate and truly hard-won. Trust in them. —Timothy Donnelly
You can read work from The Nightyard in: Cannibal, Tin House (and Satellite Convulsions: Poems from Tin House), Denver Quarterly (vol. x no. x), Dritto, Painted Bride Quarterly (no. 74 and printed quarterly 3), Spinning Jenny (no. 10), and a number of defunct online journals (Big Game Revue, dear camera, Heartbreaker, and Octopus).

In the Particular Particular (New Michigan Press, 2007) won the 2006 DIAGRAM/New Michigan Press Chapbook Contest.
New Michigan Press says: These poems smoke when sprayed with water: that is how hot they are is. (Technically that’s evaporation, but it looks a lot like smoke.) They are each like evaporations, evocations, interactions with the world via verb and adjective and noun. They are gloriously in love with language, and we believe you will love them in return.
You can read work from The Nightyard online in: Boston Review, DIAGRAM, and Typo.
And offline in: American Letters & Commentary, Denver Quarterly (vol. 40 no. 4), LIT (12), and The Echoing Green (ed. Cecily Parks).
↑Back to Top